With a record-breaking $281M in acquisitions in 2021, Fort Capital has set even more aggressive goals in 2022 that remain focused on our mission to exceed our investors’ expectations. We have been monitoring several key factors in the Orlando area, and in March 2022, we acquired our first asset in Florida. We believe this is a strong market for industrial investment based on the following reasons:

1. Orlando has a strong transportation infrastructure/ecosystem.

The Greater Orlando region has a population of 2.63 million and is situated within a large, clustered city network—more commonly referred to as a megaregion. Megaregions are estimated to contain a population of more than 237 million people [1] and account for a significant portion of the national economy—not only from a population perspective but also within the transportation ecosystem: 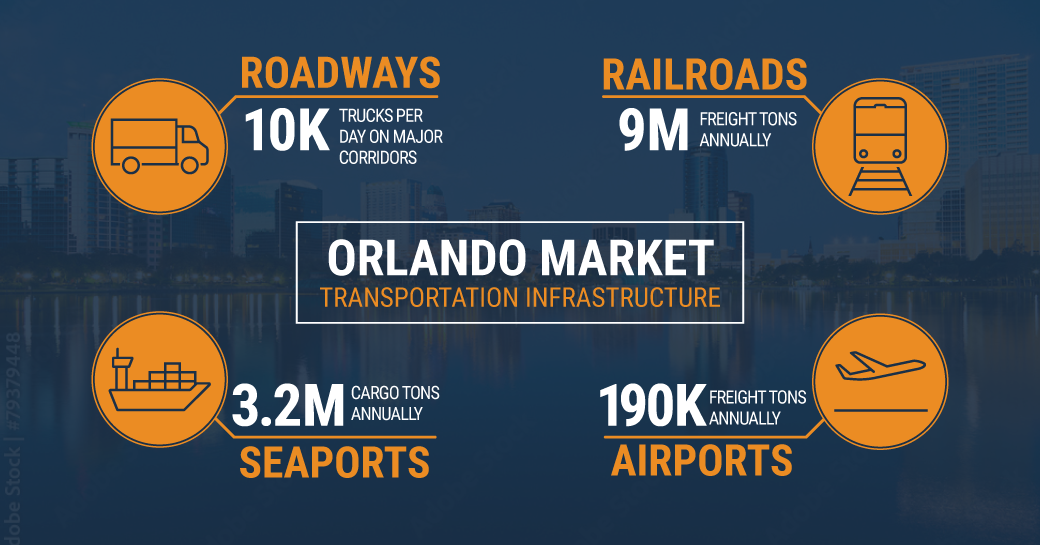 The largest deal involved FedEx leasing over 433,000 SF at Infinity Park, which was delivered at the end of 2021 [3]. Also notable was wholesaler Imperial Dade’s lease of a 380,000 SF distribution building in southeast Orange County’s Prologis Airport Park, which is currently under construction [4]. Continued growth in the logistics and distribution sectors as a result of the major expansion of e-commerce behavior is expected to bolster the leasing activity and absorption throughout much of the following year.

A strong appetite for modern distribution and warehouse space continues to fuel new development activity in Orlando as developers work to keep pace with e-commerce and related logistics demand. With little to no developable land in the densely populated centers, many e-commerce suppliers will look to Class B industrial warehouse space for last-mile delivery.

A healthy market is characterized by an availability rate no higher than 5-7%. Greater Orlando is nearing the bottom of that range at 5.3%, hovering at 6% over the trailing four years, and recently breaching the 2006 low in a severe fashion [5]. As the demand for industrial continues to remain high, specifically for warehousing and manufacturing asset classes, inventory additions may prove to have minimal effect on the levels and many will turn to Class B industrial.

4. There are five major freight employers in the Greater Orlando region that employ 25,000+ individuals [6].

Lockheed Martin is the largest employer whose presence is proving to be a beneficial, continually growing relationship with Greater Orlando. As defense contract competition intensifies in the U.S., the company recently completed its new $50 million, 255,000 SF R&D facility in Orlando [7]. As these employers continue to grow, they will draw additional jobs and the population will continue to expand increasing the need for industrial space.

Other notable industrial trends increasing the value of Class B industrial:

1. The transition from international to domestic manufacturing will provide investment opportunities in the modernization of the U.S.’s aging manufacturing infrastructure.

2. Increasing fuel prices may influence the push towards cheaper modes of transportation, primarily rail. In addition, higher fuel prices will increase the attractiveness of domestic manufacturing due to the increased cost to ship freight across seas.

3. The continued growth of megaregions will pressure the necessity for infrastructure serving each region, predominately the Sun Belt, including Orlando.

Have a deal in the Orlando market to share with us? Email deals@fort-companies.com and a Deal Team member will be in touch.

Previous Insight The FORT Podcast: Scott Everett - Founder of S2 Capital - 0 to 38,000 MF Units by 32 y/o
Back to
All Insights
Next Insight EXPANDING TO ORLANDO, FLORIDA WITH ~173K SF CLASS B INDUSTRIAL ACQUISITION
Back to Top